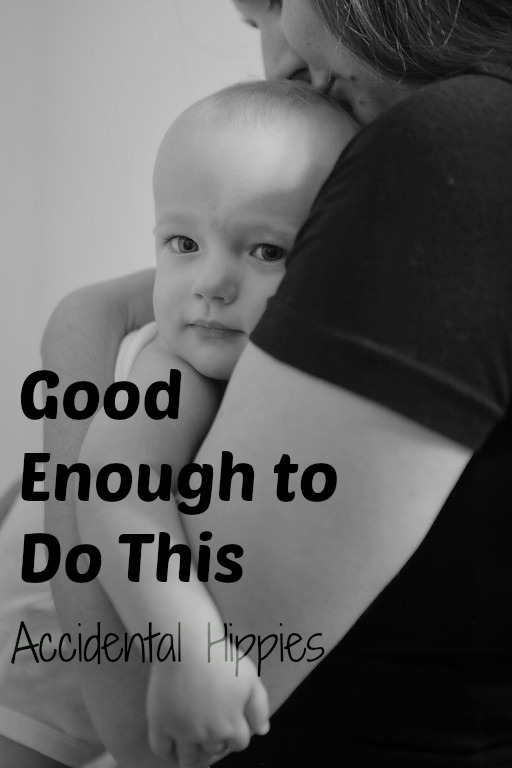 Emily here!  What a crazy month August has shaped up to be.

We started off by celebrating my little guy’s 1st birthday.  I have a lot of mixed feelings about his celebration, mostly because they all stem from the kinds of things that make the following phrase enter your mind:

“I am not good enough to do this.”

I’m sure that part of this is the amount of Pinterest envy that inevitably crops up when you see everyone else with kids the same age as yours posting all of the fun ideas they’re gathering for their child’s birthday parties.  I see those as I’m scrolling by and I think to myself, “Wow, that is really cool.  I have absolutely NO time or energy to pull off something that awesome.”  This, however, is not an irrational thought to have.  I still have to go to work every day.  We have a lot of home projects we’re trying to finish.  I still teach flute lessons in the afternoons during the week.  And then there’s, you know, the time it takes to bond and spend time with our son.  I KNOW in my bones that I will likely never have time to make some elaborate ombre cake with glitter frosting.  It just isn’t going to happen.

Add on to this my intense need to NOT do what everyone else does.  What does everyone else do at their kid’s 1st birthday?  Give them cake and sugar.  I didn’t want to do this.  I’d thought about it.  He’d become such a good little eater, with lots of fruits, veggies, lean meats, etc.  His little digestive system had NEVER had most of the stuff in cake and I didn’t really want to start just because that’s what EVERYONE does.  So between all of the impossible things I’ve found on Pinterest, I found exactly one thing that I COULD pull off that would be just for him.  A “healthy” smash cake made from all of the foods I already know he loves:  bananas, applesauce, oats, blueberries, cream cheese, and apple juice.  So I made half of the recipe and still wound up with enough for two little cakes.  They turned out super cute!

So I thought, “Perfect!  I’ll use the first one for the pictures we’ll have taken the day before his party, and use the other one on the day of the celebration.  This will be awesome!”

So then our photographer came (and shameless plug for her, but Mikki Schaffner is AWESOME, and if you’re in the Greater Cincinnati area you NEED her to take your photos) and we gave him his little cake.

He stared at his little cake with great suspicion.  “What the hell his this thing, mom?”  He poked at it a little.  “Do I…what do I do, am I supposed to EAT this thing?  This is NOT a nom.”

“Wh…what the hell is this thing, mom?”

“It’s a blueberry.  You love those!  Those are your favorite things to eat.  You are approximately 75% blueberry!”

“No, this thing is covered in some sticky crap.  I can’t eat this.”

And the ONLY thing that made him happy to eat?  A freakin’ avocado.

We finished our photo session and went about our otherwise totally average day.  I finished prepping party stuff and packing my car for the next day’s festivities.

The next day I took Anthony and my car full of color coordinated party stuff from the ol’ Dollar General and headed over to my mom’s place.  We used their condo clubhouse for the party, so I was going to drop Anthony with my stepdad and go up and decorate by myself before the family bringing the food was slated to arrive.

Again, I saw LOTS of cute things on Pinterest.  “Make this cute cake backdrop using dollar store tablecloths!”  “Save $$$ by making a posh birthday on the cheap with dollar store items!”  And I thought to myself, “Self, we can do this!  They just hung these all draped from the walls.  It’ll look totally awesome!”

So then came the moment in the party where we put him in his little chair in front of tons of complete strangers and make him eat cake, which is, you know, a totally normal way to eat a dessert.  I broke out the big plastic bib/smock and started to put it on him.  I heard a voice behind me say:

I experienced a slight bubble of rage in my head.  I thought to myself, “I know exactly how much this kid will freak out to either have his clothes removed right now, or to have to be cleaned off later after smearing food all over himself and would rather not ruin the day by creating an anxiety-filled freakout moment for my son.”

I brought out his little cake and put his little 1 candle in it.  He stared at it almost sarcastically, as if a baby could.  We all started singing “Happy Birthday”.  He stared incredulously as I tried to get him to “blow” out the candles (he doesn’t even know HOW to do this, wtf are we doing here??).  And then came the moment I KNEW would happen because he wouldn’t eat the little cake from yesterday.

He shunned his smash cake.

“Awww give him the REAL stuff!”
“Yeah, mom!  Enough of that healthy crap!  He doesn’t want to eat THAT!“

And in my head formed a bigger rage clouded by an even bigger self-loathing.

You are not his mother.  Kindly stop telling me what to do.

Of course I didn’t say anything that was in my head, I just smiled and tried to play it off.  Still, I was thoroughly irritated with myself.

Everyone else could do this better than me.  I am not good enough to do this.  Why not just give him the “real” cake?  What’s the worst that could happen?

So I did, and he liked it better than his healthy cake but not enough to go crazy for it.  He threw it on the floor just like everything else.

I let it all roll off my back, and went about the rest of the party mingling and talking to lots of great family and friends that we don’t get to see as often as we should.  I was so grateful to get to see so many people who are special to us and to celebrate our son’s first birthday with them.  But for the rest of that day and for many days that followed, I kept playing the cake scene over and over again in my head.

I can’t speak for my husband and how he feels as a Dad, but as a Mom I feel like there’s this unspoken command we all feel like we have to follow to be “perfect moms”.  We try and try, push and push, to do and be everything we can for our kids.  As if our failure to do so will cause our kids to come out ruined or something, and this is absurd.  We’re all trying to do the best we can.  We’re all trying to raise good kids who can go out and be a light in the world.  It isn’t a competition.  There isn’t a prize at the end for who raised the best or healthiest kid.  You don’t earn points for only feeding them a raw vegan diet or for playing only educational games, and you sure as hell don’t earn demerits for letting them watch TV or, heaven forbid, eat CAKE.

I have to actively remind myself of that sometimes.  I have to take it all in and realize that, at the end of the day, the fact that I got to celebrate my son’s first birthday is a miracle on so many levels.

If you’re like me though, I know that this annoying thought will still enter your brain now and again.  I KNOW some of you fellow moms are reading this and KNOW that you have thought that YOU weren’t good enough.  Like every other mom can do it better than you.  But dig deep — you know in your heart of hearts that this has never been true.  There is no one on Earth who can love them like you can.

You are their mama, and that makes you more than good enough.